Today we talked about The Sun and its impact on our solar system with specific emphasis on Gravity, Light (Radiation), and Solar Wind. Here is the video that we watched in class (Don’t forget your paragraph summary!). I have also included two other videos on that looks at the structure of the sun more and then a fly over by the ISS that shows the auroras.

Attack of the Sun

Inside Our Sun: A Deeper Look

Here is a cool solar system rap that can help you review for the test.

A newfound comet defied long odds on Thursday (Dec. 15), surviving a suicidal dive through the sun’s hellishly hot atmosphere, according to NASA scientists. 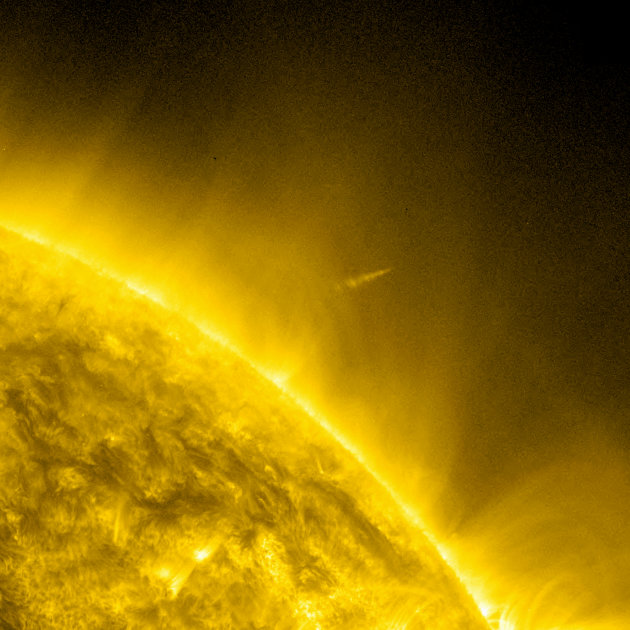 Comet Lovejoy plunged through the sun’s corona at about 7 p.m. EST (midnight GMT on Dec. 16), coming within 87,000 miles (140,000 kilometers) of our star’s surface. Temperatures in the corona can reach 2 million degrees Fahrenheit (1.1 million degrees Celsius), so most researchers expected the icy wanderer to be completely destroyed.

But Lovejoy proved to be made of tough stuff. A video taken by NASA’s Solar Dynamics Observatory (SDO) spacecraft showed the icy object emerging from behind the sun and zipping back off into space.

“Breaking News! Lovejoy lives! The comet Lovejoy has survived its journey around the sun to reemerge on the other side,” SDO researchers tweeted.

SDO is one of many instruments that scientists — eager to record and study the comet’s presumed demise — trained on Lovejoy as it streaked toward the sun.

“We have here an exceptionally rare opportunity to observe the complete vaporization of a relatively large comet, and we have approximately 18 instruments on five different satellites that are trying to do just that,” Karl Battams, a scientist at the Naval Research Laboratory in Washington, D.C., wrote on the Sungrazing Comets website, before Lovejoy’s closest solar approach.

Battams runs the website, which is devoted to comets discovered by two different spacecraft: NASA’s Solar Terrestrial Relations Observatory (STEREO) and the Solar and Heliospheric Observatory (SOHO), which is operated jointly by NASA and the European Space Agency (ESA).

“I expected a diffuse dust tail to survive (for several hours) before fading away but NOT any kind of nucleus!” he tweeted. “I’ve worked with sungrazers for 8yrs; today was the most amazing day I’ve ever had with them!”

Preparing for the end
Lovejoy has a core about 660 feet (200 meters) wide. It belongs to a class of comets known as Kreutz sungrazers, whose orbits bring them very close to the sun.

All Kreutz sungrazers are thought to be the remnants of a single giant comet that broke apart several centuries ago. They’re named after the 19th-century German astronomer Heinrich Kreutz, who first showed that such comets are related.

Comets plunge into the sun on a regular basis, but they rarely give much advance notice of their suicidal intentions. That’s why scientists were so excited about Lovejoy. Australian amateur astronomer Terry Lovejoy discovered the icy wanderer on Nov. 27, giving researchers plenty of time to map out their observation campaign.

And that campaign has been intense, involving five different spacecraft. In addition to SDO, SOHO and STEREO, scientists planned to use Japan’s Hinode satellite and ESA’s Proba spacecraft to track Lovejoy’s movements, Battams wrote.

NASA also created a website providing updates about the comet’s pass through the corona, as well as images of the event beamed down by SDO. It can be found here: http://sdo.gsfc.nasa.gov/data/lovejoy.php

For his part, Terry Lovejoy said he was happy to have made a contribution, and he marveled a bit at all the attention the comet has been getting.

“It’s been tremendous,” Lovejoy told SPACE.com. “Apparently it’s all over Facebook, and I don’t use Facebook. But there’s a lot of interest. I think a lot of people like the name — the Lovejoy name seems to strike a chord with people.”

A dramatic escape
Lovejoy is quite large for a sungrazing comet, and experts expected it to die an impressive death. The website Spaceweather.com, for example, predicted Lovejoy would blaze as brightly as Jupiter or Venus in the sky as it neared the sun.

Battams also expected a good show, saying the comet might even be visible from the ground around sunset today in the Northern Hemisphere.

“I do think that it will put on a spectacular show for us and will be the brightest Kreutz-group comet that SOHO has ever observed,” Battams wrote last week.

Though the early returns are still coming in, those forecasts appear to be on the money. Observations from various spacecraft do indeed show Lovejoy flaring up significantly as it neared our star.

Researchers will keep analyzing the images to better understand the comet’s daring solar approach. And now skywatchers apparently have another shot to catch a glimpse of the resilient Lovejoy on Friday morning (Dec. 16).

For observers in North America, the comet will rise approximately 5 to 10 minutes before dawn and will be situated to the upper right of the sun. If Lovejoy is still shining at least as brightly as Venus, it may be visible, experts say.

You could also try to spot Lovejoy after the sun comes up, if you’re exceedingly careful. Block the rising sun behind a distant building and focus on the part of the sky 3 to 4 degrees above and to the right of the sun (your clenched fist held at arm’s length is equal to roughly 10 degrees). CAUTION: Never point binoculars or a telescope at or near the sun, and never look directly at our star with the naked eye. Serious eye damage can result.

And don’t get your hopes up, either. The comet may well be too faint to see, experts say.

Note: If you take any good pictures of Comet Lovejoy and would like them to be considered for a future story or image gallery, contact SPACE.com managing editor Tariq Malik at tmalik@space.com.