Here is a video clip going over genetic counseling.

Here is a quick overview of mitosis…it does not label the stages, but has a nice little movie at the end showing division actually taking place…

This next video labels the stages and shows a pretty cool (I think) computer simulation of the process.

Don’t forget the stages of the cell cycle:

I’ve updated this post to include an additional video covering the phases of mitosis and what happens. 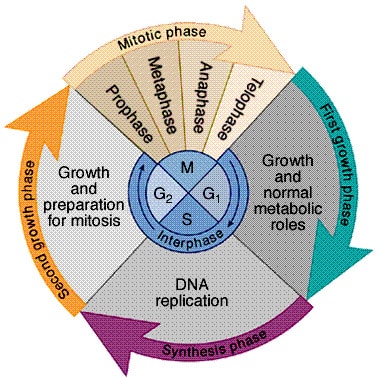 ScienceDaily (Aug. 18, 2011) — Researchers at NYU School of Medicine have discovered the cellular mechanisms that normally generate chromosomal breaks in bacteria such as E. coli. The study’s findings are published in the August 18 issue of the journal Cell.

“This study provides a new explanation on how bacteria generate mutations and adapt to stressors like antibiotics. The study is quite unusual as it touches on several different fields of molecular biology at the same time: replication, transcription, translation and DNA repair,” said Evgeny Nudler, PhD, Julie Wilson Anderson Professor of Biochemistry, NYU School of Medicine and co-author of the study.

Researchers designed an experimental system to directly monitor co-directional and head-on collisions between the replisome and RNA polymerase in living cells under various conditions of growth.

Backtracking, or backward sliding of RNA polymerase along RNA and DNA, is an intrinsic property of all cellular RNA polymerases from bacteria to humans. Multiple anti-backtracking mechanisms that employ various transcription factors exist in bacteria and nucleus-containing cells, including human cells.

Researchers demonstrated that the cooperation between translating ribosomes and RNA polymerase is central in the maintenance of genomic stability because it prevents backtracking.

The implication of these findings is significant as the ribosome is the primary sensor of cellular metabolism and stress. It has been well established that stress-induced mutagenesis is activated in response to adverse conditions, such as starvation or antibiotics. The development of mutations depends on error-prone DSB repair, which accelerates adaptation to environmental changes, such as acquisition of resistance to antibiotics. In this respect, the backtracking-based mechanism of DSB may account for stress-driven evolution in bacteria.

“Because the organization of replisomes and RNA polymerase is preserved in evolution, the phenomena of backtracking-driven genome instability for E.coli could occur in other organisms as well. It may potentially explain, for example, some cases of chromosomal fragility associated with certain human diseases” said Dr. Nudler.