WASHINGTON – Back at the dawn of the dinosaur era, a quick-moving predator set the stage for the famous and fearsome giants that followed in its footsteps, according to new research. “It was a little dinosaur, but it carried a big evolutionary stick,” said Paul C. Sereno of the University of Chicago, a leader of the team that discovered Eodromaeus.

The 4-foot-long hunter lived 230 million years ago in what is now South America and appears to be the ancestor of such creatures as Tyrannosaurus rex.

“It is stunning,” Sereno said of the find, reported in Friday’s edition of the journal Science.

Its features, such as a balancing tail and air pockets in the skull, show it was closely related to T. rex, he said.

But while it stood on two feet like T. rex, Eodromaeus (pronounced eyo-DRO-may-us) was a lightweight at just 10- to 15-pounds.

“This is a very exciting find indeed,” said Oliver W. M. Rauhut, a curator at the Bavarian State Collection for Palaeontology and Geology in Munich, Germany.

“The origin and early diversification of dinosaurs is still poorly understood,” said Rauhut, who was not on the research team.

Nick Longrich of the department of geology and geophysics at Yale University agreed: “It’s very significant, because it helps give us a better idea of what the ancestor of carnivorous dinosaurs — including Tyrannosaurus, Allosaurus and the birds — would have looked like.”

“A new species of early dinosaur is always an exciting find, especially when the specimens are so complete, like Eodromaeus,” added Randall B. Irmis, a professor of geology and geophysics at the University of Utah.

It shares many features with an early carnivorous dinosaur named Tawa from New Mexico and reported last year by Irmis and colleagues.

The similarity supports the idea that these early carnivorous dinosaurs moved between North and South America during the Late Triassic period, said Irmis, who was not part of Sereno’s research team.

In addition to the discovery of Eodromaeus — which means dawn runner — the researchers proposed reclassifying a previously known dinosaur called Eoraptor.

It was similar in size to Eodromaeus, but differences in the teeth indicate Eoraptor more likely was an ancestor of the giant plant-eating sauropod dinosaurs than the hunting theropods like T. rex with which it had been associated, according to Sereno, Paul N. Martinez of the National University of San Juan in Argentina, and their co-authors.

“The reclassification of Eoraptor actually makes perfect sense … the teeth have always made me wonder,” said Longrich, who was not on the research team.

Added Longrich, “this paper helps sort out the origin of several major groups — the big carnivores like T. rex, the birds, and the giant plant eaters like Apatosaurus,” formerly known as Brontosaurus.

The new find brings scientists to within a few million years of the original “Eve” dinosaur, Sereno commented. But now the search gets elusive because of the lack of bones below the level where Eodromaeus was found.

Lower, there are footprints but not bones, Sereno said.

The Eodromaeus’ fossils were discovered in the late 1990s in the Ischigualasto formation in northeastern Argentina.

Palaeontologists have identified the oldest known dinosaur embryos, belonging to a species that lived some 190 million years ago. The eggs of Massospondylus, containing well-perserved embryos, were unearthed in South Africa back in 1976. The creature appears to be an ancestor of the family that includes the long-necked dino once known as Brontosaurus. The study in the Journal of Vertebrate Paleontology also sheds light on the dinosaurs’ early development. 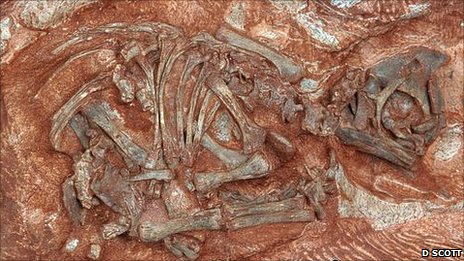 While the embryos are only about 20cm long, the adults are thought to have reached some five metres in height

The researchers used the embryos to reconstruct what the dinosaurs’ babies might have looked like when they roamed the Earth. Having studied the fossilised eggs, the team, led by Professor Robert Reisz of the University of Toronto Mississauga in Canada, discovered that the embryos were the oldest ones ever found of any land-dwelling vertebrate. “This project opens an exciting window into the early history and evolution of dinosaurs,” said Professor Reisz. “Prosauropods are the first dinosaurs to diversify extensively, and they quickly became the most widely spread group, so their biology is particularly interesting as they represent in many ways the dawn of the age of dinosaurs.”

‘Awkward’ bodies
Massospondylus belonged to a group of dinosaurs known as prosauropods, the ancestors of sauropods – huge, four-legged dinosaurs with long necks. Having studied the tiny (20cm-long) skeletons, the researchers noted that the embryos were almost about to hatch – but never had the chance. Interestingly, the report says, the embryos looked quite different compared to the adult animals. Once hatched, the babies would have had rather long front legs, meaning that they would have been walking on all fours rather than on two legs like the adults. The embryos’ heads were also disproportionally big, but it is believed the adult Massospondylus, which were about five metres in length, had relatively tiny heads and long necks. The little ones’ anatomy would have changed with age. The paper stated that the rather awkward body of the embryos suggested that just like humans, the hatchlings would have required parental care – and if in this case, it would be the earliest known example of parental care.

Scientists have discovered in China the first complete skeleton of a pivotal ancestor of Earth’s largest land animals — the sauropod dinosaurs. The new species, tentatively dubbed Yizhousaurus sunae, lived on the flood plains around Lufeng in the Yunnan Province of South China about 200 million years ago. The species helps explain how the iconic four-footed, long-necked sauropod dinosaurs evolved.

Unlike the 120-foot-long, 100-ton sauropod giants that came later, Yizhousaurus was about 30 feet in length, but it shows all of the hallmarks of later sauropods: the beginning of a long neck, a robust skeleton and four-legged posture. It also comes with an intact fossilized skull — which is very rare and crucial for understanding its place in the evolution of sauropods.

“Sauropods have these big bones but their skulls are very lightly constructed and also very small,” said paleontologist Sankar Chatterjee of Texas Tech University. Chatterjee presents the discovery on Oct. 31 at the annual meeting of the Geological Society of America in Denver.

Yizhousaurus’s skull is broad, high and domed, less than a foot long with a short snout, eye sockets on the sides for scanning enemies. It has an unusually wide and U-shaped jaw, in top view, like that seen in later Camarasaurus, said Chatterjee. Numerous serrated and spoon-shaped teeth of the upper and lower jaws would shear and slide past each other for cutting plant material during feeding. The sturdy teeth and raised neck let the animal very easily nip small branches from treetops and then chew the plant material.

“Once the plant food was ingested, a gastric mill in the stomach probably provided further mechanical breakdown of the plant,” Chatterjee explained. Apparently the animal was well adapted to a life of eating plants to support its large body.

Besides its telltale physical features, Yizhousaurus was also found in revealing company. A half century ago spectacular specimens of prosauropod dinosaurs such as Lufengosaurus were discovered at the same location. This makes sense, since most paleontologists are of the opinion that prosauropods gave rise to sauropods, despite the fact that the transition has been very vague, Chatterjee said.

“This is why this new one (Yizhousaurus), may bridge this gap,” he said.

Abstract is available at http://gsa.confex.com/gsa/2010AM/finalprogram/abstract_175675.htm