This video does a pretty good job simplifying and summarizing what we covered in class today.

Followed by a National Geographic Video on Global Warming… 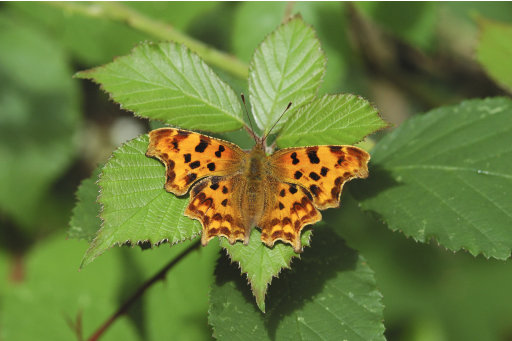 This is a photograph of a comma butterfly, which has moved north 135 miles in just 21 years in Great Britain. (AP Photo/Butterfly Conservation, Jim Asher)...

WASHINGTON (AP) — Animals across the world are fleeing global warming by heading north much faster than they were less than a decade ago, a new study says.

About 2,000 species examined are moving away from the equator at an average rate of more than 15 feet per day, about a mile per year, according to new research published Thursday in the journal Science which analyzed previous studies. Species are also moving up mountains to escape the heat, but more slowly, averaging about 4 feet a year.

The species — mostly from the Northern Hemisphere and including plants — moved in fits and starts, but over several decades it averages to about 8 inches an hour away from the equator.

“The speed is an important issue,” said study main author Chris Thomas of the University of York. “It is faster than we thought.”

Included in the analysis was a 2003 study that found species moving north at a rate of just more than a third of a mile per year and up at a rate of 2 feet a year. Camille Parmesan of the University of Texas, who conducted that study, said the new research makes sense because her data ended around the late 1990s and the 2000s were far hotter.

Federal weather data show the last decade was the hottest on record, and 2010 tied with 2005 for the hottest year on record. Gases from the burning of fossil fuel, especially carbon dioxide, are trapping heat in the atmosphere, warming the Earth and changing the climate in several ways, according to the overwhelming majority of scientists and the world’s top scientific organizations.

As the temperatures soared in the 2000s, the species studied moved faster to cooler places, Parmesan said. She pointed specifically to the city copper butterfly in Europe and the purple emperor butterfly in Sweden. The comma butterfly in Great Britain has moved more than 135 miles in 21 years, Thomas said.

It’s “independent confirmation that the climate is changing,” Parmesan said.

One of the faster moving species is the British spider silometopus, Thomas said. In 25 years, the small spider has moved its home range more than 200 miles north, averaging 8 miles a year, he said.

Stanford University biologist Terry Root, who wasn’t part of this study but praised it as clever and conservative, points to another species, the American pika, a rabbitlike creature that has been studied in Yellowstone National Park for more than a century. The pika didn’t go higher than 7,800 feet in 1900, but in 2004 they were seen at 9,500 feet, she said.

For Thomas, this is something he notices every time he returns to his childhood home in southern England. The 51-year-old biologist didn’t see the egret, a rather warm climate bird, in the Cuckmere Valley while growing up. But now, he said, “All the ditches have little egrets. It was just a bizarre sight.”

Thomas plotted the movement of the species and compared it to how much they would move based on temperature changes. It was a near perfect match, showing that temperature changes explain what’s happening to the critters and plants, Thomas said. The match wasn’t quite as exact with the movement up mountains and Thomas thinks that’s because species went north instead or they were blocked from going up.

Thomas found that the further north the species live, the faster they moved their home base. That makes sense because in general northern regions are warming more than those closer to the equator..

Thomas said what he’s studied isn’t about some far off problem.

“It’s already affected the entire planet’s wildlife,” Thomas said in a phone interview. “It’s not a matter that might happen in the lifetime of our children and our grandchildren. If you look in your garden you can see the effects of climate change already.”

CANCUN, Mexico – Encroaching seas in the far Pacific are raising the salt level in the wells of the Marshall Islands. Waves threaten to cut one sliver of an island in two. “It’s getting worse,” says Kaminaga Kaminaga, the tiny nation’s climate change coordinator.

The rising ocean raises questions, too: What happens if the 61,000 Marshallese must abandon their low-lying atolls? Would they still be a nation? With a U.N. seat? With control of their old fisheries and their undersea minerals? Where would they live, and how would they make a living? Who, precisely, would they and their children become?

For years global negotiations to act on climate change have dragged on, with little to show. Parties to the 193-nation U.N. climate treaty are meeting again in this Caribbean resort, but no one expects decisive action to roll back the industrial, agricultural and transport emissions blamed for global warming — and consequently for swelling seas.

From 7,000 miles (11,000 kilometers) away, the people of the Marshalls — and of Kiribati, Tuvalu and other atoll nations beyond — can only wonder how many more years they’ll be able to cope.

“People who built their homes close to shore, all they can do is get more rocks to rebuild the seawall in front day by day,” said Kaminaga, who is in Cancun with the Marshallese delegation to the U.N. talks.

The Marshallese government is looking beyond today, however, to those ultimate questions of nationhood, displacement and rights.

“We’re facing a set of issues unique in the history of the system of nation-states,” Dean Bialek, a New York-based adviser to the Republic of the Marshall Islands who is also in Cancun, told The Associated Press. “We’re confronting existential issues associated with climate impacts that are not adequately addressed in the international legal framework.”

The Marshallese government took a first step to confront these issues by asking for advice from the Center for Climate Change Law at New York’s Columbia University. The center’s director, Michael B. Gerrard, in turn has asked legal scholars worldwide to assemble at Columbia next May to begin to piece together answers.

Nations have faded into history through secession — recently with the breakup of the former Yugoslavia, for example — or through conquest or ceding their territory to other countries.

But “no country has ever physically disappeared, and it’s a real void in the law,” Gerrard said during an interview in New York.

The U.N. network of climate scientists projects that seas, expanding from heat and from the runoff of melting land ice, may rise by up to 1.94 feet (0.59 meters) by 2100, swamping much of the scarce land of coral atolls.

But the islands may become uninhabitable long before waves wash over them, because of the saline contamination of water supplies and ruining of crops, and because warming is expected to produce more threatening tropical storms.

“If a country like Tuvalu or Kiribati were to become uninhabitable, would the people be stateless? What’s their position in international law?” asked Australian legal scholar Jane McAdam. “The short answer is, it depends. It’s complicated.”

McAdam, of the University of New South Wales, has traveled in the atoll nations and studied the legal history.

As far as islanders keeping their citizenship and sovereignty if they abandon their homelands, she said by telephone from Sydney, “it’s unclear when a state would end because of climate change. It would come down to what the international community was prepared to tolerate” — that is, whether the U.N. General Assembly would move to take a seat away from a displaced people.

The 1951 global treaty on refugees, mandating that nations shelter those fleeing because of persecution, does not cover the looming situation of those displaced by climate change. Some advocate negotiating a new international pact obliging similar treatment for environmental refugees.

In the case of the Marshallese, the picture is murkier. Under a compact with Washington, citizens of the former U.S. trusteeship territory have the right to freely enter the U.S. for study or work, but their right to permanent residency must be clarified, government advisers say.

The islanders worry, too, about their long-term economic rights. The wide scattering of the Marshalls’ 29 atolls, 2,300 miles (3,700 kilometers) southwest of Hawaii, give them an exclusive economic zone of 800,000 square miles (2 million square kilometers) of ocean, an area the size of Mexico.

The tuna coursing through those waters are the Marshalls’ chief resource, exploited by selling licenses to foreign fishing fleets. “If their islands go underwater, what becomes of their fishing rights?” Gerrard asked. Potentially just as important: revenues from magnesium and other sea-floor minerals that geologists have been exploring in recent years.

While lawyers at next May’s New York conference begin to sort out the puzzle of disappeared nations, the Marshallese will grapple with the growing problems.

The “top priority,” Kaminaga said, is to save the isthmus linking the Marshalls’ Jaluit island to its airport, a link now swept by high tides.

Meantime, a lingering drought this year led islanders to tap deeper into their wells, finding salty water requiring them to deploy emergency desalination units. And “parts of the islands are eroding away,” Kaminaga said, as undermined lines of coconut palms topple into the sea.

This week in Cancun and in the months to come, the Marshalls’ representatives will seek international aid for climate adaptation. They envision such projects as a Jaluit causeway, replanting of protective vegetation on shorelines, and a 3-mile-long (5-kilometer-long) seawall protecting their capital, Majuro, from the Pacific’s rising tides.

Islanders’ hopes are fading, however, for quick, decisive action to slash global emissions and save their remote spits of land for the next century.

“If all these financial and diplomatic tools don’t work, I think some countries are looking at some kind of legal measures,” said Dessima Williams, Grenada’s U.N. ambassador and chair of a group of small island-nations. Those measures might include appeals to the International Court of Justice or other forums for compensation, a difficult route at best.

In the end, islanders wonder, too, what will happen to their culture, their history, their identity with a homeland — even to their ancestors — if they must leave.

“Cemeteries along the coastline are being eroded. Gravesites are falling into the sea,” Kaminaga said. “Even in death we’re affected.”