In her book Sex, Drugs, and Sea Slime: The Oceans’ Oddest Creatures and Why They Matter, marine scientist Ellen Prager describes the natural history of some of the oceans’ more interesting creatures, including hagfishes, “fried egg” nudibranchs and bone eating zombie worms.

Humpbacks whales blow bubbles around schools of fish to concentrate them for easier capture. Although this hunting technique, called bubble-net feeding, has been documented for decades, just how whales make the nets wasn’t well-understood until now, says David Wiley, a biologist with the National Oceanic and Atmospheric Administration.

As the ocean floor plunges off southwestern Puerto Rico, it reveals coral reefs dotted with bright-blue sea squirts and a multitude of other organisms whose existence has given hope to scientists who strive to save the island’s threatened ecosystems.

The organisms are an integral part of a group of reefs discovered to be thriving near an area where most shallow coral reefs and the fish that depend on them are in poor health overall.

The reefs — at a depth of up to 500 feet (152 meters) in an area 12 miles (19 kilometers) across — were recently discovered as part of a federally funded mission to conduct research on deep-water corals, according to the U.S. National Oceanic and Atmospheric Administration.

“We stumbled across this area,” Richard Appeldoorn, a professor at the University of Puerto Rico in Mayaguez who was involved in the mission, told The Associated Press on Thursday.

Divers enrolled in a one-year training course to depths of up to 100 feet (31 meters) noticed the thriving reefs and large predators lurking nearby, said Appeldoorn, who oversees the university’s fisheries, biology and coral reef studies program.

The deep underwater landscape they encountered was populated by lettuce coral, the lace-like star coral and several species of sponges, as well as groupers, snappers and reef sharks, said Appledoorn, who is calling for the protection of the reefs and nearby shallower areas where fish spawn and later retreat to deeper waters.

“Any large fish is always neat to see, not having seen them on top of the (ocean) platform for decades, or not at all,” he said.

The reef’s existence means that struggling, shallow ecosystems in the U.S. Caribbean territory may have a better-than-believed chance at survival, because fish species thriving at a deeper level can help replenish stocks in more shallow reefs, said Appeldoorn and Ernesto Diaz, director of Puerto Rico’s Coastal Zone Management Program.

The discovery — first announced by NOAA last week — comes as officials in Puerto Rico and the U.S. Virgin Islands seek to create the Caribbean Regional Ocean Partnership, an endeavor that aims to better coordinate the use of coastal waters and the implementation of conservation programs.

The two islands recently submitted a proposal for the partnership to NOAA, which also financed the mission that led to the discovery of the new reefs.

Among the partnership’s proposed goals is the creation of a zoning map for waters surrounding Puerto Rico and the U.S. Virgin Islands. The map would designate certain areas for conservation, recreation or commercial purposes, Diaz said.

The project also would allow researchers to explore how the ocean could be harnessed for energy or for the development of fish farms or the installation of underwater fiber-optic cables, Diaz said.

Officials decided to launch the project shortly after the administration of President Barack Obama approved a recent new policy that strengthens the way the U.S. manages its oceans and coasts.

“About 22 percent of Puerto Rico’s waters are protected,” Diaz said. “The other 78 percent, what potential do they have?”

Diaz said the partnership would eventually extend to the nearby Dominican Republic and the British Virgin Islands.

As Diaz awaits approval from NOAA, scientists including Appeldoorn are beginning to explore reefs off the nearby island of Mona, which is just west of Puerto Rico and is sometimes the unintended final destination of migrants from Cuba and the Dominican Republic. 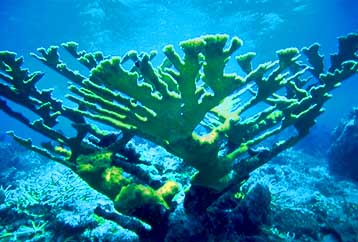 Over the next century, recruitment of new corals could drop by 73 percent, as rising carbon dioxide levels turn the oceans more acidic, suggests a new study led by scientists at the University of Miami Rosenstiel School of Marine and Atmospheric Science. The research findings reveal a new danger to the already threatened Caribbean and Florida reef Elkhorn corals.

“Ocean acidification is widely viewed as an emerging threat to coral reefs,” said Rosenstiel School graduate student Rebecca Albright. “Our study is one of the first to document the impacts of ocean acidification on coral recruitment.”

Elkhorn coral, known as Acropora palmata, is recognized as a critical reef-building species that once dominated tropical coral reef ecosystems. In 2006, Elkhorn was included on the U.S. Endangered Species List largely due to severe population declines over the past several decades.

The absorption of carbon dioxide by seawater, which results in a decline in pH level, is termed ocean acidification. The increased acidity in the seawater is felt throughout the marine food web as calcifying organisms, such as corals, oysters and sea urchins, find it more difficult to build their shells and skeletons making them more susceptible to predation and damage.

Recent studies, such as this one conducted by Albright and colleagues, are beginning to reveal how ocean acidification affects non-calcifying stages of marine organisms, such as reproduction.

“Reproductive failure of young coral species is an increasing concern since reefs are already highly stressed from bleaching, hurricanes, disease and poor water quality,” said Chris Langdon, associate professor at the Rosenstiel School and co-author of the study, published in the Proceedings of the National Academy of Sciences.