ScienceDaily (Nov. 8, 2011) — The latest image released from Mars Express reveals a large extinct volcano that has been battered and deformed over the aeons. By Earthly standards, Tharsis Tholus is a giant, towering 8 km above the surrounding terrain, with a base stretching over 155 x 125 km. Yet on Mars, it is just an average-sized volcano. What marks it out as unusual is its battered condition.

Shown in images taken by the HRSC high-resolution stereo camera on the European Space Agency’s Mars Express spacecraft, the volcanic edifice has been marked by dramatic events.

At least two large sections have collapsed around its eastern and western flanks during its four-billion-year history and these catastrophes are now visible as scarps up to several kilometres high.

The main feature of Tharsis Tholus is, however, the caldera in its centre.

It has an almost circular outline, about 32 x 34 km, and is ringed by faults that have allowed the caldera floor to subside by as much as 2.7 km.

It is thought that the volcano emptied its magma chamber during eruptions and, as the lava ran out onto the surface, the chamber roof was no longer able to support its own weight.

So, the volcano collapsed, forming the large caldera.

November is a busy month for Mars exploration: Russia and NASA both plan launches this month.

Russia’s Phobos-Soil (formerly known as Phobos-Grunt) is designed to land on Phobos, the larger of Mars’ two moons, to collect samples, and return them to Earth in 2014. It also carries the first Chinese spacecraft to Mars, Yinghuo-1.

Mars Express HRSC digital elevation models of Phobos were used by Russian scientists to assess the mission’s potential landing sites and ESA is also providing telecommunications support for both Phobos-Soil and Yinghuo-1.

In return, the European scientific community will have access to data obtained by both spacecraft.

NASA’s mission is the Mars Science Laboratory, a large rover known as Curiosity, with experiments designed to detect organic molecules — past or present — on the Red Planet.

Also worth noting is the simulated Mars mission, Mars500, which ended on Friday when the hatch was opened for the first time since June 2010. For 520 days, the international crew had been working in a simulated spacecraft in Moscow. 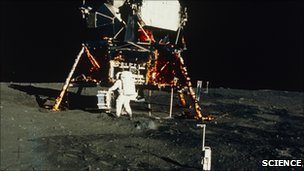 A frigid crater at the moon’s south pole is jam-packed with water ice, with some spots wetter than Earth’s Sahara desert, boosting hopes for future lunar bases.

That’s the picture painted by six new studies that analyzed the intentional moon crash of a NASA spacecraft on Oct. 9, 2009. The agency’s LCROSS probe was looking for signs of water when it smashed into Cabeus crater at the moon’s south pole last year, and the spacecraft found plenty of it, as scientists announced last year.

The new results expand on those original findings, revealing that Cabeus harbors many other compounds, too — stuff like carbon monoxide, ammonia, methane, mercury and silver.

And the new studies — reported as six separate papers in the Oct. 22 issue of the journal Science — put a solid number on the amount of frozen water at the moon’s south pole. [10 Coolest New Moon Discoveries]

Water ice makes up about 5.6 percent of the total mass on the floor of Cabeus — making the crater about twice as wet as Sahara Desert soil, according to LCROSS mission principal investigator Tony Colaprete.

“That is a surprise,” said Colaprete, who works at NASA’s Ames Research Center in Moffett Field, Calif. “And it has a lot of ramifications in terms of our understanding of water and other volatiles on the moon.”

The high concentration of water ice came as a bit of a shock to mission scientists.

“I still can’t really wrap my brain around it,” said Colaprete, who led one of the studies reported in the journal Science and is a co-author on several others. “There are places on the moon that are wetter than parts of Earth — that’s kind of neat.”

The LCROSS spacecraft picked up ice signatures for four full minutes. If the ice crystals had been impregnated with lots of lunar dirt grains, that signal would have faded within 20 seconds or so, according to Colaprete, since grains heat up fast in sunlight.

“For ice crystals to last more than a minute, they need to be 80 or 90 percent water ice,” Colaprete told SPACE.com. “Otherwise they will sublime, evaporate in the sunlight.”

Another intriguing result was the variety and amount of other substances inside Cabeus.

LCROSS and a sister probe, the Lunar Reconnaissance Orbiter (LRO), found evidence of all kinds of compounds, including elemental hydrogen, carbon monoxide, ammonia, methane, mercury, calcium, magnesium and silver. And these materials made up a surprisingly large chunk of the crater floor.

“Where we impacted, up to 20 percent was something other than dirt,” Colaprete said. “It was ices, volatiles, light metals. That was a surprise, that you had so much of this material in there.”

Smashing a probe into the moon

The LCROSS spacecraft, short for Lunar Crater Observation and Sensing Satellite, was built to live fast and die young. It launched, along with LRO, in June 2009 aboard a Centaur rocket.

On Oct. 9 of that year, the Centaur hurtled solo toward Cabeus, a 60-mile-wide (97-km-wide) crater near the moon’s south pole. When the rocket hit, it raised a huge debris plume up into the sunlight, where the two probes could scan it with their instruments, which included cameras and various spectrometers.

LCROSS plummeted just four minutes behind the Centaur, getting an up-close look at the ejecta cloud before smashing into the lunar surface itself. The LRO spacecraft watched all this action from above, peering at the two impacts’ debris plumes. It remains in lunar orbit today, mapping the moon’s surface.

Now, after analyzing more of the data gathered by both LCROSS and LRO, they have a much better idea of just what’s in Cabeus crater — and they’re gaining a better understanding of how it may have gotten there.

Where did all of this stuff come from?

The researchers are still trying to work out exactly how all of these compounds — the water and everything else — made their way to the bottom of Cabeus crater.

The original source of much of the material is likely asteroid or comet impacts, scientists said. Once they arrived, the compounds could have moved all over the lunar surface — liberated from the dirt by micrometeorite strikes or solar heating — until they hit a cold trap like Cabeus.

The permanently shadowed inside of Cabeus is among the coldest places in the solar system, with average temperatures around minus 387 degrees Fahrenheit (minus 233 Celsius). Many compounds would sink into these frigid depths and never surface again. So water, ammonia and everything else could keep accumulating in the crater for billions of years.

“This place looks like it’s a treasure chest of elements, of compounds that have been released all over the moon,” said Peter Schultz of Brown University, lead author of one of the Science papers and co-author of another one. “And they’ve been put in this bucket in the permanent shadows.”

But Colaprete thinks there’s more to the story at Cabeus.

The new research details, in part, how the crater was chosen for the LCROSS kamikaze mission: LRO instruments picked up a strong hydrogen signal in the crater, indicating the likely presence of lots of water ice.

But there are many freezing-cold craters at the moon’s south pole, and most of them didn’t show such a strong hydrogen signature. And some of the places with lots of hydrogen aren’t even in permanent shadow.

Cabeus stands out, indicating that there’s likely more to accumulating large quantities of water — and other materials — than just frigid temperatures.

“I think the best model right now, given the compounds we see, is that the Cabeus site is actually a comet impact site,” Colaprete said.

That’s not to suggest that volatiles don’t migrate around the moon and get trapped in the bottom of permanently shadowed craters. That’s likely happening, too, Colaprete said. But that background process likely can’t fully explain Cabeus.

“It seems to suggest that our old thinking about this kind of uniform emplacement of water over a billion years is only a part — and maybe a minor part — of the story when it comes to these pockets of high concentrations,” Colaprete said.

Going to the moon?

The high concentration of water ice at the bottom of Cabeus is good news for anyone pushing for bases at the moon’s poles.

Future moon-dwellers could conceivably mine such large quantities of ice efficiently. They could it process it into its constituent hydrogen and oxygen, prime ingredients of rocket fuel. And they could melt the ice down and drink it — provided they remove some of the nasty stuff, like mercury.

Some of the other compounds found in the crater — such as elemental hydrogen, methane and ammonia— could be useful, too, according to Colaprete.

“These places are definitely resource-rich and suggest that they would be advantageous to use for producing resources, if it ever came to that,” Colaprete said.

There’s no reason to think Cabeus is an anomaly, Colaprete said. There could be other super-enriched sites like it at both the north and south poles.

And the poles more generally could harbor a lot of water ice, according to the new research. Modeling results support the possibility that there may be large regions of lunar “permafrost,” where relatively accessible ice could be trapped below the surface, even in warmer spots that see the sun occasionally.

And that’s a good thing, because Cabeus itself may not be the ideal site for a lunar base.

For one thing, the floor of the crater is in permanent shadow and incredibly cold. It’s tough to design equipment that can operate at temperatures of minus 387 degrees Fahrenheit (minus 233 Celsius)–and that equipment likely can’t be solar-powered.

Also, the findings suggest that all those volatile compounds form a soft, frosty layer on the Cabeus floor that could bog down rovers or landers. When the Centaur hit, LCROSS measured a 0.3 second delay until a big heat flash resulted.

That’s a very long lag, especially considering that the rocket was moving at 5,580 mph (9,000 kph). The result suggests that the soil is very porous, perhaps almost fluffy.

“If we had hit rock, that flash would have happened almost instantaneously,” Colaprete said.

Sacrificing itself for science

The $79 million LCROSS mission wasn’t the first to find water on the moon — three other spacecraft had previously detected evidence of water ice on the lunar surface, a finding announced just a few weeks before LCROSS’ kamikaze plunge.

But the LCROSS mission is yielding new insights that should change how researchers think about the moon, according to Colaprete. That means the spacecraft’s sacrifice was worth it.

“We went out with a bang,” Colaprete said, “and the return has just been phenomenal.”